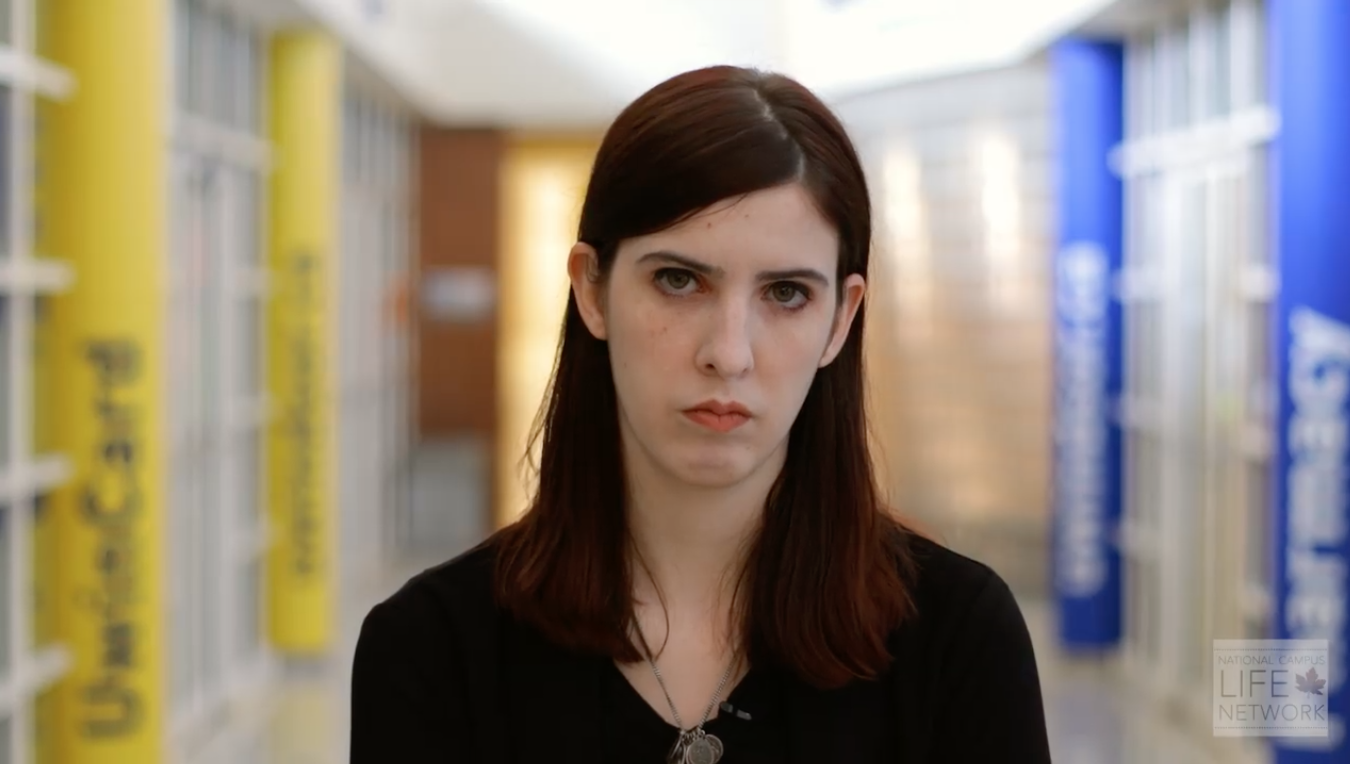 Because they’re too busy waging it.

The National Campus Life Network last week released a video featuring a monologue by Maggie McAuley, a pro-life activist at the University of Windsor.

In the video, McAuley alleges she was “spat upon” by a professor during one of her pro-life demonstrations on campus. When she complained to police, they threatened to arrest her for her lawful demonstration.

She says one man put a photo of an aborted fetus in her mailbox with the caption, “Your baby after I rape you.”

After being assaulted, threatened with rape, and subjected to much verbal abuse, McAuley went to her school’s women’s centre. Despite being a young woman victimized by men’s violence, there was no support available to her from the supposedly feminist agency on campus.

“Instead of helping me, my women’s centre denied me,” she said. “They told me they wouldn’t help me because it was a pro-choice space. Professors, campus police, the women’s centre, and my student union perpetuated a dehumanizing environment to such a degree that someone felt justified in assaulting me.”

I should probably clarify that the University of Windsor Students’ Alliance doesn’t actually have a “women’s centre.” No, the mandate of helping women on campus falls on the “Womxn’s Centre,” defined on its website as “an actively pro-choice, feminist space.”

Womxn is not the latest anti-biotic to hit the market, but rather a feminist spelling intended to stress that women—erm, womxn—don’t need “men” to exist.

The only way this agency would care about a rape threat against a pro-life woman is if the assailant was dressed as the letter ‘E’.

The center ignored two requests for comment I sent regarding McAuley’s allegations. Unsurprising, because there’s no answer that doesn’t expose the hypocrisy inherent in how many feminists view pro-life women. To blame is intersectionality—the idea that all forms of purported oppression have to be dealt with in tandem.

A woman facing threats and violence from men used to wield a social justice trump card. Now, victimhood is not determined by what happens to a woman, but by what she believes. At the University of Windsor, being pro-life is the new “she was asking for it.” McAuley learned this the hard way by not espousing the ‘correct’ identity politics.

This was apparent on a national scale when the federal Liberal caucus waged procedural war on Lethbridge, Alberta member of parliament Rachael Harder, the Conservatives’ shadow minister for status of women.

Harder is a millennial female in political leadership. That used to be the type of person lionized by the Left, but any celebration is eclipsed by the fact that she thinks abortion is wrong. She isn’t alone, but that doesn’t seem to matter.

A 2016 Ipsos poll found little distinction between men and women in likelihood to be pro-choice or pro-life. Of men, 57 per cent said a woman should be able to choose when and if she has an abortion, while 58 per cent of women took the same stance.

In disagreeing with that, Harder is on-side with more than four in 10 Canadian woman, yet to the Liberals, that disqualifies her from chairing the committee tasked with championing women’s issues in government.

It’s true that female public figures face different kinds of criticism than their male counterparts do. That problem is even more amplified for pro-life women, who are subjected to untold numbers of sexual comments and detailed critiques of their appearance from internet troglodytes. But there’s an added dimension of scorn from the liberals and feminists who present themselves as bastions of enlightenment and social justice.

These voices accuse pro-life women of being traitors to their sex and attack them for not hewing to intersectional feminist theory. They’re too daft to see how hypocritical it is to tell a woman what she’s supposed to think. Is that not the paternalism against which feminists are supposed to be fighting?

This attitude is not exclusive to pro-life women, of course. It’s the same phenomenon that’s led to the denigration of “white feminists”—women accused of having too much privilege to speak to social issues. It’s also at the epicenter of the feud between intersectional feminists and TERFs (or trans-exclusionary radical feminists) on the issue of transgender identity.

Identity politics is so engrained in liberalism that the Left does not accept or even understand the idea of a member of one of its preferred groups going rogue, ideologically.

It reminds of a quip by transgender trailblazer Caitlyn Jenner at the 2016 Republican National Convention.

It’s easier for the Left to get the idea of a woman having a penis than it is to understand a woman with a penis liking gun rights and lower taxes.

If support for a group is contingent on ideological beliefs, that support is a sham. If those on the Left want any credibility in speaking up about the war on women, they’d do well to address their part in it.