The full letter from Tommy Robinson’s lawyer to Stripe is at the bottom of this post.

When Tommy Robinson left the Old Bailey on Tuesday, he wanted to focus on his campaign for the European Parliament. A decision two days later from a Silicon Valley tech giant may make that more difficult.

A New York law firm representing Robinson says two of the British candidate’s accounts with Stripe – an online payment processing company – were suspended, including one used exclusively by the VoteTommy election campaign.

“Stripe informed Tommy this week that two accounts connected with him…were terminated on the ground that his business violated the Stripe Services Agreement,” a letter from Ronald Coleman to Stripe’s general counsel says. “Tommy’s campaign and fundraising are entirely lawful under both UK and EU law. Tommy has complied with all legal requirements for registering as an official candidate and he will be on the ballet in the EU Parliament election on May 23rd.”

Stripe has issued no public statement about the suspension, though I’ve reached out to the company’s media relations office and will update this when I hear back.

Coleman goes on his letter to note that Stripe has not denied its services to any other candidate in the election, and that the suspension “is seriously hindering Tommy’s ability to participate in the democratic process.”

My longstanding belief is that companies should have the right to do business with whomever they’d like, and should not be compelled otherwise. This is not as cut-and-dried where elections are concerned.

Canadian election law, for example, requires that publishers allow all candidates the opportunity to purchase advertising if it will allow some to do so. A company terminating a relationship with one week until the election disadvantages Robinson’s campaign at what is often the most critical point for fundraising.

Imagine if, say, a candidate’s web host decided in the days before an election that it would take their website offline, and that website was the vehicle through which the campaign would email people about how and where to vote.

I won’t pretend to know the intricacies of European election law, but if Stripe had an issue with being the payment processor of Robinson’s campaign, it has had ample opportunities to make a decision to suspend prior to this point.

Letter from Tommy Robinson&… by on Scribd 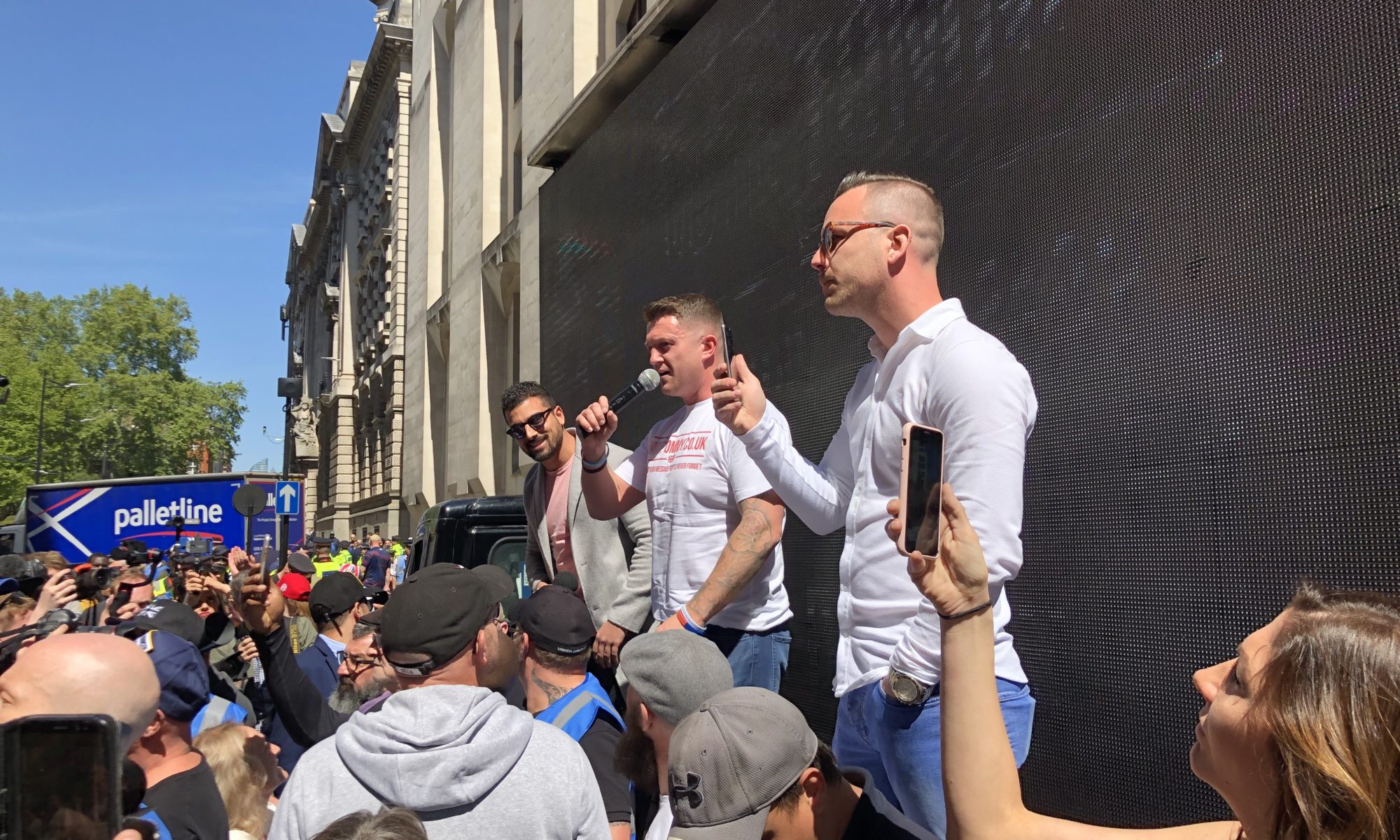 Whatever you may think of Tommy Robinson, no one can argue he’s been given a fair shake by the media or the British government.

To be fair, he’s thumbed his nose at both quite a bit over the years, but due process is meant to be for everyone.

Everyone except him, that is.

An appellate court already found last summer his rights had been violated when a Leeds judge had Robinson arrested, charged, tried, convicted, sentenced and hauled off to jail in a matter of hours. When I was in London last October I overheard British mainstream media journalists conspiring to lie about Robinson and professing his guilt before the judge even entered the courtroom.

That judge, the most senior at the famous Old Bailey, said thanks to a statement provided by Robinson there was enough ambiguity about whether he was, in fact, guilty of contempt of court that the case should be referred to the Attorney General of the United Kingdom, Geoffrey Cox.

It was, and Cox ordered a new hearing, sending Robinson back to court on a charge for which he’s already served 10 weeks of a 13 month sentence that’s been tossed out.

On Tuesday, government will argue in a two-hour hearing that Robinson should be subjected to another contempt of court hearing. Robinson’s legal team will argue he shouldn’t.

Yes, I flew across the Atlantic for a two-hour procedural matter. I am grateful to have received a grant covering my flight and hotel costs, raised by Ezra Levant and The Rebel. I’m paying for everything else out of my own pocket. Though I’m happy to do so, as Robinson’s case really is about the procedure.

After all, it was a supposed procedural infraction that the initial Leeds judge said justified imprisoning Robinson in the first place. Covering, as an activist journalist, a case the mainstream media had been ignoring was his “crime.”

I said when I came to the United Kingdom last October that it wasn’t to be a cheerleader of Robinson. I meant it, and even put my reservations with his past comments and positions to him directly, in an interview.

I’m here again because as the prosecution of Robinson mounts, so too do questions about the state of free speech and press freedom in Western nations.

Despite all this the governments of Canada and the United Kingdom are co-hosting a press freedom summit in London–where I am right now–in July. Last week I launched a crowdfunding campaign through True North to attend and cover the summit, being spearheaded by Foreign Affairs Minister Chrystia Freeland.

If you support independent voices fighting to stand up for these freedoms, please make a contribution of what you can afford, whether it’s a few dollars or a few hundred dollars.

I take no joy in needing to cover these things, but take comfort in knowing how many people there are who support the effort.

Less than five months after a United Kingdom judge referred Tommy Robinson’s contempt of court case to the attorney general, a new hearing has been ordered for the English activist.

United Kingdom Attorney General Geoffrey Cox said Thursday that there are “strong grounds” to bring new proceedings against Robinson. The case will be re-heard in London on March 22.

The question of whether Robinson was in contempt of court stems from a live stream he hosted last May outside the Leeds courthouse where a number of now-convicted sex groomers were appearing. Robinson, whose sentence on an earlier contempt finding was suspended, was arrested, charged, convicted and sentenced to 13 months behind bars within a matter of five hours. He was hauled off to prison that very day despite the administrative nature of his offense.

He appealed the conviction in August, prompting a judge to acknowledge numerous errors made by the Leeds judge who prosecuted him. A new hearing was ordered for October at the Old Bailey.

In October, Recorder of London Nicholas Hilliard found that Robinson’s statement raised enough doubts about the case that it should be referred to the attorney general, who has been tight-lipped on his plans until issuing his decision Thursday.

I was in the courthouse for that hearing, during which you may remember I overheard British Press Association journalists conspiring to manipulate their coverage of Robinson and his legal ordeal.

Robinson has long maintained that he will end up behind bars regardless, citing the prosecutorial witchhunt that he says has dogged him to this point.

If scheduling permits, I hope to be back in London to cover the case’s latest developments.