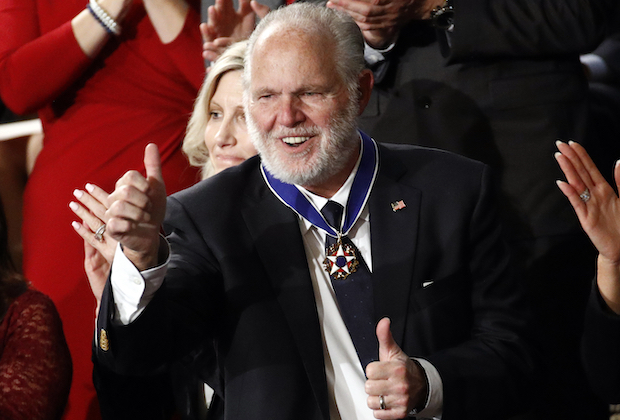 “Have you ever actually listened to him?”

A university friend asked me that after I said in my youthful naïveté that Rush was a little “out there.”

No, I had to concede. I protested, but I had read quotes of his!

My first time tuning into The Rush Limbaugh Show was in a minivan full of young Michigan Republicans I had befriended, on a road trip to the 2008 Republican National Convention.

I was in awe. Not just of Limbaugh’s talednt as a broadcaster, but at the vast difference between Limbaugh and the media’s characterization of him, which I and so many others had allowed to define him.

Limbaugh died this morning at 70, after a battle with lung cancer.

When I first listened to Limbaugh on the air, I had no idea I would end up as a talk radio host myself some years later (unfortunately programmed at the same time as Limbaugh’s long-running show).

My late friend Kathy Shaidle let me use her Rush 24/7 account so I could tune into Rush on the infamous “Dittocam.” I learned about conservatism, American politics, history, and the importance of a consistent outlook on the world, from America’s Anchorman.

I was a proud student of the Limbaugh Institute for Advanced Conservative Studies, a reference that won’t be lost on fellow listeners.

Radio is the most intimate medium. The relationship between a radio broadcaster and listener is unlike any other in media. Limbaugh knew this, and never took the audience for granted. His fans didn’t just listen to the show, but partook in it.

My experience is not all that unique. It’s hard to find a conservative, least of all one in talk radio, who was not influenced by Limbaugh. All political talk radio hosts, even those not directly inspired by him, get to do what they do because Limbaugh built a medium for them.

When I started podcasting in 2010, it was difficult to not want to emulate Rush. So many broadcasters did – and failed. There was only one Rush, and only ever will be. But still, I listened. In fact, I studied.

Just under nine years ago, Limbaugh joked that Georgetown law student Sandra Fluke was a “slut” and a “prostitute” after Fluke testified that her Catholic university should cover her birth control under the student health plan.

In the span of a couple of days, dozens (some estimates say over 100) of sponsors dropped Limbaugh. In the eyes of the mainstream media, he was “done.”

At the time, I didn’t realize this had happened before. A few times. Limbaugh had triggered a few moral panics over the years. This was the first while I’d been listening to him. I, too, believed he was done.

My friend who had first introduced me to The Rush Limbaugh Show scoffed. I can’t recall whether he told me to have faith, but he as might as well have.

Rush survived. He outlasted Sandra Fluke, who was to be the woman that took him down, but is instead a footnote in Limbaugh’s 33-year reign.

I never spoke to Limbaugh, though on one occasion he cited a story I had written on his show. I nonetheless made my infinitesimally small contribution to the show by sending the odd story ideas to Mark Steyn, Limbaugh’s self-styled undocumented guest host, when he’s been behind the microphone in Limbaugh’s absence, something that happened with increasing frequency over the past year.

As Steyn has said on numerous occasions, Rush has been on the top for a third of the entire history of the medium of radio.

He’s survived the digital revolution, and every attempt to cancel him along the way – even picking up a Presidential Medal of Freedom last year, just hours after he announced to his audience of millions his cancer diagnosis.

Prayers – and dittos – to Rush, Kathryn, Snerdley, and the whole Limbaugh family.