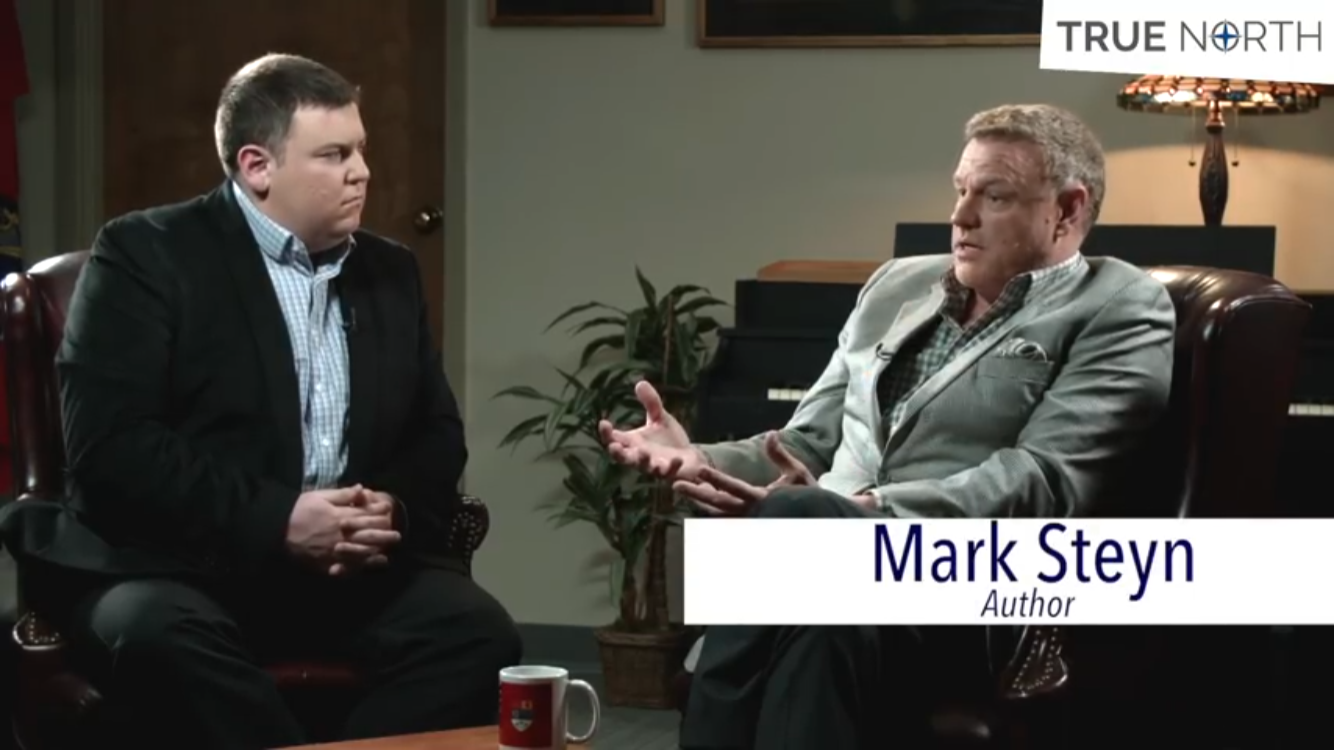 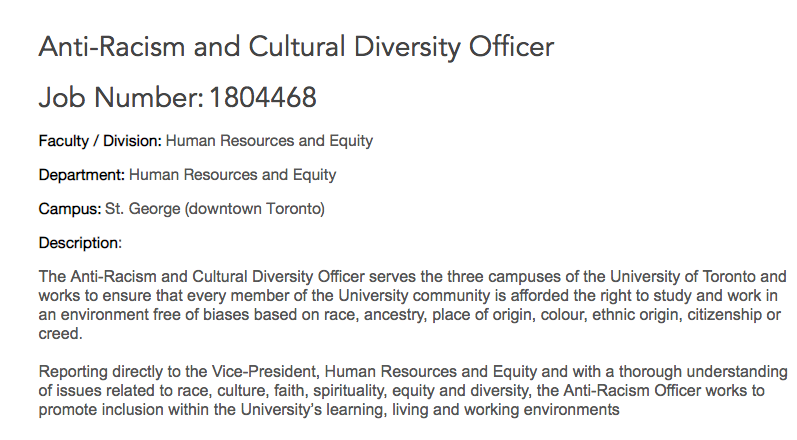 The human rights industry is booming, which means those with social justice in their hearts and dollar signs in their eyes are set.

Canada’s largest postsecondary institution, the University of Toronto, is hiring an “anti-racism and cultural diversity officer.”

The successful candidate will work “to ensure that every member of the University community is afforded the right to study and work in an environment free of biases based on race, ancestry, place of origin, colour, ethnic origin, citizenship or creed.”

Though religion isn’t included in the list, the new officer must have a “thorough understanding of issues related to race, culture, faith, spirituality, equity and diversity.”

The position has a salary range of $109,555 to $182,591, and, of course, requires working under the vice-president of equity, which is totally an executive-level position.

It may seem like a punchline, but these positions are growing increasingly powerful in a climate where anti-racism and cultural diversity are valued above academic freedom and freedom of speech.

Indeed, the University of Toronto job posting says this officer will be involved in drafting the school’s policies and practices surrounding “anti-racism, cultural diversity, freedom of speech, and freedom of expression.”

The winning contender might even get to help bully pro-life students, as I wrote today happened at the University of the Fraser Valley.

(And of course priority is given to candidates who can check off as many boxes as possible in the “Diversity Survey” part of the application.)

This comes just a few weeks after the new Ontario government instituted a requirement for schools like University of Toronto to develop and implement free speech policies by January.

If you’re interested, or just want to have a laugh, the job posting is here.

The Anti-Racism and Cultural Diversity Officer serves the three campuses of the University of Toronto and works to ensure that every member of the University community is afforded the right to study and work in an environment free of biases based on race, ancestry, place of origin, colour, ethnic origin, citizenship or creed.

Reporting directly to the Vice-President, Human Resources and Equity and with a thorough understanding of issues related to race, culture, faith, spirituality, equity and diversity, the Anti-Racism Officer works to promote inclusion within the University’s learning, living and working environments

Develops initiatives and collaborates on activities and programs that promote cross-cultural understanding and inclusion across the three campuses of the University of Toronto;
Works closely with the Special Advisor on Equity Issues and within the broader equity team to provide advice and make recommendations to University decision-makers, senior administrators and others in leadership roles on matters of policy and practice concerning anti-racism, cultural diversity, freedom of speech and freedom of expression for students, staff and faculty;
Works at the strategic level to promote inclusion within the University’s learning, living and working environments; works closely with the University’s Student Life and Human Resources leadership and portfolios.

In consultation with and guided by the Workplace Investigations Office, may conduct fact finding and/or investigations, recommends additional sources of assistance and resolution for complainants and respondents, provides mediation, information and expert advice.

The Anti-Racism Officer develops and leads related professional development and educational initiatives for all levels of the University community;

Develops standardized processes and guidelines for complaint management and resolution.

Education:
Graduate degree or an equivalent combination of education and experience.

Experience:
Professional experience in and understanding of complex issues related to equity and diversity as they relate to the student experience and the workplace. A thorough understanding of anti-racism and cultural diversity frameworks essential. Experience working within a post-secondary context or similarly complex organization is highly desirable as is an understanding of issues of faith within a broader anti-racism and cultural diversity strategy. Familiarity with the University environment strongly preferred. Understanding of the Canadian Charter of Rights and Freedoms and the Ontario Human Rights Code required. Experience working with students and an appreciation for the diverse backgrounds and experiences of the University’s student body.

Skills:
Excellent interpersonal, communication, facilitation and mediation skills; commitment to, and knowledge of issues dealing with discrimination and harassment on the basis of race, ancestry, place of origin, colour, ethnic origin, citizenship and creed. Experience advising on and conducting investigations; experience developing and providing professional development and education.

Other:
Ability to engage with various stakeholders and members of the University community and connect and build rapport with student groups; ability to work within a team; research skills; project management and resource development skills; ability to operate at the strategic, policy and operational levels; highly developed leadership skills; highly developed organizational and program development skills.

Commitment and sensitivity to matters related to the student experience, educational opportunity and employment within a broader anti-racism and cultural diversity strategy; demonstrated analytical ability and ability to use initiative and good judgment in decision making. Willingness to work outside of normal working hours.