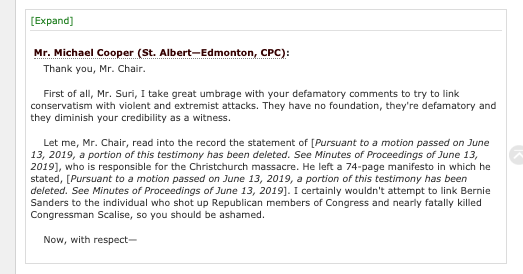 Every record has been destroyed or falsified, every book has been rewritten, every picture has been repainted, every statue and street and building has been renamed, every date has been altered. And that process is continuing day by day and minute by minute. History has stopped. Nothing exists except an endless present in which the Party is always right. I know, of course, that the past is falsified, but it would never be possible for me to prove it, even when I did the falsification myself. After the thing is done, no evidence ever remains. The only evidence is inside my own mind, and I don’t know with any certainty that any other human being shares my memories. Just in that one instance, in my whole life, I did possess actual concrete evidence after the event—years after it.

If there was ever a time when silence was deafening, it’s now. If you listen to the audio recording of a justice committee meeting last week and it stops abruptly, there isn’t a problem with your internet connection. That silence is the product of a successful effort by Liberal politicians to literally censor the words of a colleague.

The censored words are those of Conservative MP Michael Cooper, who was ejected from the justice committee by Conservative leader Andrew Scheer. Cooper read an excerpt from the Christchurch killer’s manifesto to challenge a committee witness’ assertion that “conservative commentators” inspire mass violence.

But the attacks on Cooper, and the truth he spoke, went beyond political. As I wrote about last week, members of the House of Commons’ Standing Committee on Justice and Human Rights voted unanimously (with the Conservative members abstaining) to remove Cooper’s comments from the official record.

Not only were they removed from the transcript, pictured above. Even the raw audio feed of the testimony was retroactively edited, with silence replacing the offending words.

First, the stream goes dead when Cooper mentions Brenton Tarrant, the Christchurch killer, by name. It goes dead again as Cooper reads the section of the manifesto disproving the slanderous assertion made by witness Faisal Khan Suri.

I was in the committee room when the motion to censor and censure Cooper was passed, but it was still chilling to hear–or not hear, rather–the new “record” of that May 28 meeting.

You can listen to the updated version of history for yourself here, though I’ve embedded the relevant excerpt below.

As noted in the above Orwell quote, in the absence of an official record we’re left only with memories, fallible and unprovable as they are. Even when reporting on Cooper’s comments, no Canadian media outlet included them in full. At this point, no publicly accessible transcript of the exchange exists, with the exception of my own, below.

I manually transcribed this after the motion to censor Cooper was passed. Regretfully I didn’t have the forethought to download the audio myself.

Thank you, Mr. Chair. First of all, Mr. Suri, I take great umbrage with your defamatory comments to try to link conservatism with violent and extremist attacks. They have no foundation. They are defamatory. And they diminish your credibility as a witness.

Let me, Mr. Chair, read into the record the statement of Brenton Tarrant, who is responsible for the Christchurch massacre. He left a 74-page manifesto in which he stated “conservatism is corporatism in disguise. I want no part of it,” and, “The nation with the closest political and social values to my own is the People’s Republic of China.”

I certainly wouldn’t attempt to link Bernie Sanders to the individual who shot up Republican members of Congress and nearly fatally killed Congressman (Steve) Scalise. So you should be ashamed.

Michael Cooper, Conservative Member of Parliament, St. Albert–Edmonton, at a meeting of the House of Commons Standing Committee on Justice and Human Rights, May 28, 2019.