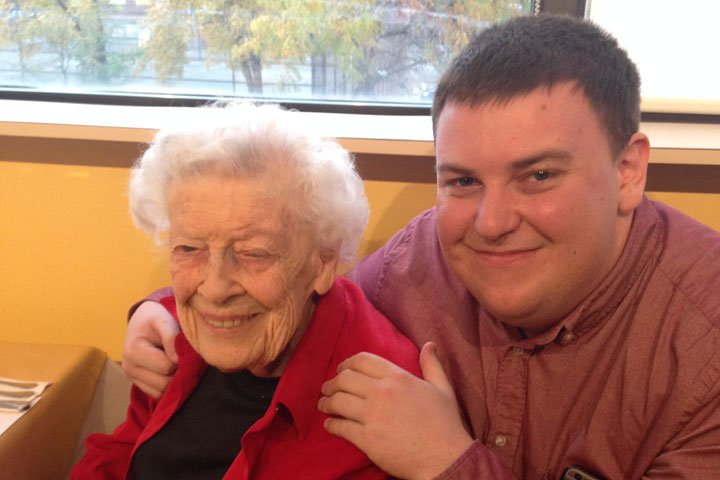 In July, my loving grandmother, Eva Quinn, turned 100. On Tuesday, with her three children by her side, she passed away.

It was never a goal of hers to achieve centenarian status. In fact, she was so dead set against it that I think it just tempted God. But still, she hit the milestone that is so significant, it warranted letters from the Governor General and the Queen herself.

It was an exceptional moment for a woman who deserved no less.

Any death creates a void in a family, but when someone of this vintage passes on, the world loses something.

Born in the United Kingdom in 1917, Nanny — as we called her — was part of the cohort that Tom Brokaw famously dubbed the “greatest generation.”

After the Second World War, she became a war bride, marrying a Canadian and moving to Ottawa, and later Montreal.

She was the literal embodiment of the phrase “fresh off the boat,” travelling to Canada by freighter — the most affordable mode of transportation — taunting her redheaded friend with the nickname “ginger” for the duration of the voyage.

Nanny lived in Canada for twice as long as she did in Britain, and became a Canadian citizen. Though none of that seemed to matter, as in spirit she remained a Brit until her final breath. Her unabating accent afforded her the opportunity to remind people of her true country.

When she moved to London, Ont., to be closer to family in 2005, she would routinely offend the locals by telling anyone who asked — and even those who didn’t — that she hailed “from the real London.”

But she made a life here, working and raising her and her husband’s three children, who bore grandkids who bore great-grandkids. Earlier this year, she met and held my brother’s infant son, born nearly a century after she was, in an entirely new world.

She did everything one is supposed to and witnessed tremendous change around her in the process. Her life was remarkably ordinary, which, in this day and age, is what made her so extraordinary.

She was special, most definitely, but not atypical of her generation.

Though she wasn’t particularly political, she had no time for political correctness and its increasing foothold in society.

She would unapologetically tell of how she once had to get off a bus in Montreal because the smell of garlic was so strong after picking up workers in Little Italy.

She would also be the first one to tell a young me to dust myself off and get back up after a fall.

Her British wit could be deadly, but the good news is that most lacked the extensive vocabulary to understand their tongue-lashings. (Which they likely deserved.)

I regret never asking her whether she thought she was leaving a better world than the one she inherited. I’m not sure whether she even knew.

She was critical of many of the West’s social shifts, such as the move to excessively coddling children and people taking offence to everything.

I know she never envisioned a time in which speaking about what had always been black-and-white truths was somehow controversial.

But she also saw advances in economic opportunity, safety, and science that were foreign to her parents and grandparents.

This is why the perspective of the Greatest Generation is so valuable.

Despite living through the air raids, bomb threats, and the overarching uncertainty of wartime, her war stories often devolved into complaints that she wasn’t able to buy oranges. (On principle, she would have at least one a day for the rest of her life, totalling just shy of 28,000 navels.)

The history I learned from her was more valuable than that which I received from my public school education. This period wasn’t about places and dates to her, but life itself.

That living testimony is becoming harder to find.

Death is inevitable for all of us — certainly for anyone whose age reaches triple digits. That doesn’t soften the loss, but it does provide comfort that a life was lived to its fullest.

I am sad because of Nanny’s departure from this earth because of her impact in my life, but also because she is one of the last holdouts of the generation that quite literally saved the world.

When I last saw her, I knew it would be the last time. I had the privilege of saying goodbye on Monday, too. She is gone, but her legacy and that of her generation persists.

I’ll miss Nanny’s wit, charm, and self-deprecatory humour. I’ll also miss the perspective that only someone who has lived for the last century can provide.