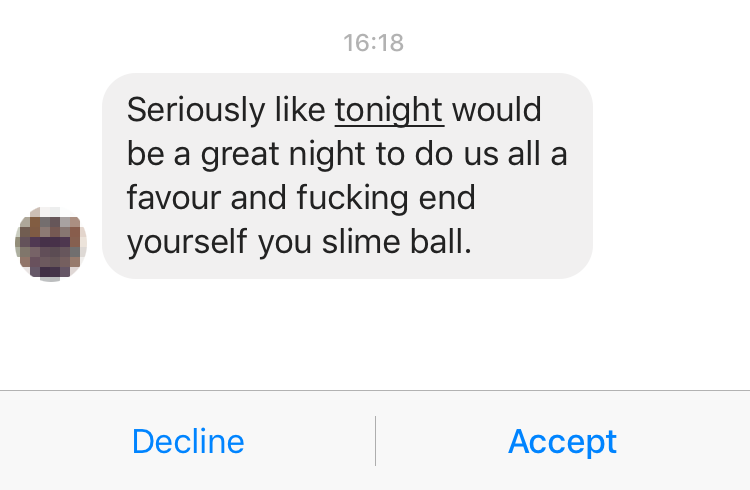 When the emotions of politics and the impetuousness of social media fuse, the result isn’t pretty. Social media, which can be a cesspool at the best of times, morphs into something unrecognizable during elections.

It may look like noise to an outsider, but when your name is the one in the line of fire, it comes at a cost.

During a brief stint as a politician this spring, I had a front row seat to my own dehumanization, when, as a PC candidate in Ontario’s June 7 election, my social media history made headlines.

I went viral—and not in the charming toddler-crashes-BBC-interview or Chewbacca-mom-laughs sort of way. My Twitter mentions were so voluminous that my phone’s battery drained in record time.

Just try to imagine that quantity. Now understand that almost every incoming tweet was negative.

The anger was directed at a slew of long-deleted postings I made nearly a decade ago. Most were ill-advised attempts at humour. With some, I couldn’t even figure out what I was getting at. I chock them up to an unfortunate combination of mental illness, immaturity and a general recklessness at that point in my life that extended far beyond Twitter.

People can decide for themselves whether they believe I’m a different person than the one depicted in those years-old snapshots. What I take issue with are the digital vigilantes—digilantes, if you will—who so cruelly and viciously attack others for being unkind on the internet, ignorant of their own hypocrisy.

A few messages still stand out. 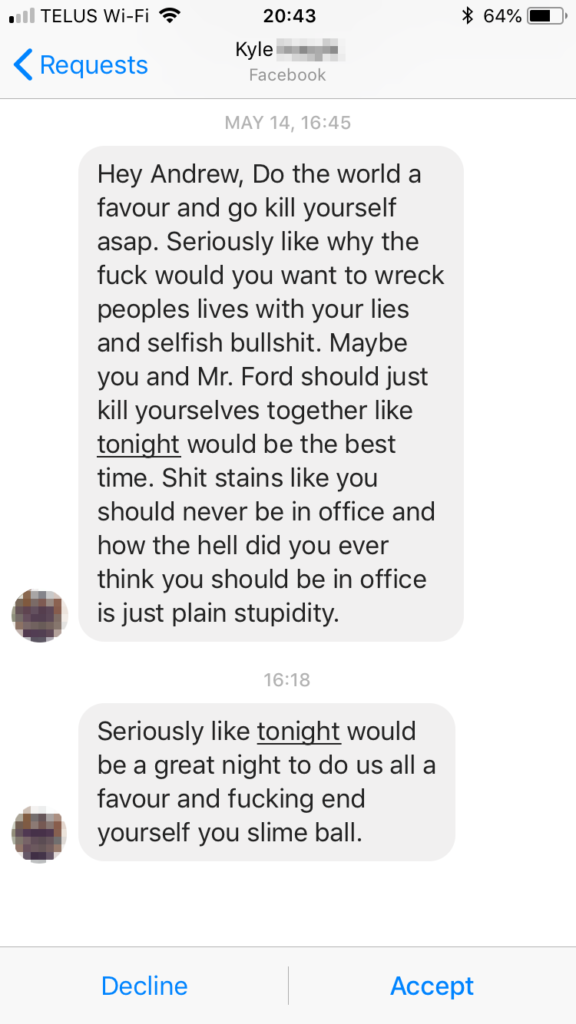 “Do the world a favour and go kill yourself asap,” Kyle from Owen Sound ordered me. When I hadn’t heeded his request a few weeks later, he followed up.

“Seriously, like tonight would be a great night to do us all a favour and fucking end yourself you slime ball.”

On the suicide-wisher’s Facebook page was an adorable photo of him reading to two young children who were seated on his lap. I hope he wouldn’t read a message like this in the vicinity of the children—so why send it to a perfect stranger?

“I feel bad for your heart that it failed on you. Hope on the next round you don’t pull through. Fuck you asshole,” wrote Lou from Toronto.

“I hope you get gang raped,” said Ben, adding, “You don’t deserve the oxygen you breathe. Do us all a favor, let that mental illness take hold and KILL YOURSELF.” 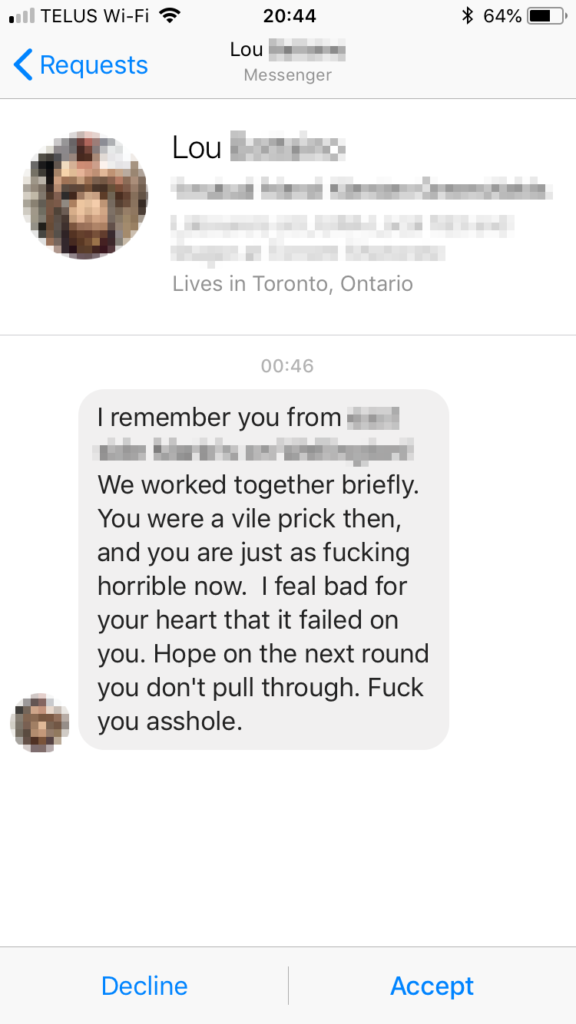 Most of the messages were tamer of course, composed not of death wishes, but of a tired rotation of fat jokes or musing about my wife’s and my sex life. Some dedicated trolls harassed my friends and family directly, which was harder for me to stomach than what was pointed at me.

Consistent in almost all was a nastiness combined with a disinterest in genuine dialogue.

Before the crocodile tears come, know that I’m not shrouding myself in victimhood. I share these for the sake of others, be they politicians or otherwise, who aren’t able to brush off such venom.

Had I been subjected to this volume and tone of messages six or seven years ago, I would be hanging from a bridge.

Whether those urging me to kill myself would have felt any remorse if I did is irrelevant—these comments are made with no sense of consequences, and without recognition of the target’s humanity.

When Twitter and Facebook users join the chorus, they surrender their individual voices in pursuit of a singular mob voice, seeking only to add gasoline to the inferno.

What’s one more tweet when there are already thousands, right? By the same token, you’ve got to know that your insulting tweet isn’t adding anything. It serves no other purpose than virtue signaling to your followers that you’re moral and hip for attacking whichever politician, celebrity or random sap it’s en vogue to hate that hour.

When we import this phenomenon into politics, democracy is threatened.

While free speech, which, yes, includes online nastiness, is paramount to democracy, voters are setting themselves up for failure by instating litmus tests no one can pass. 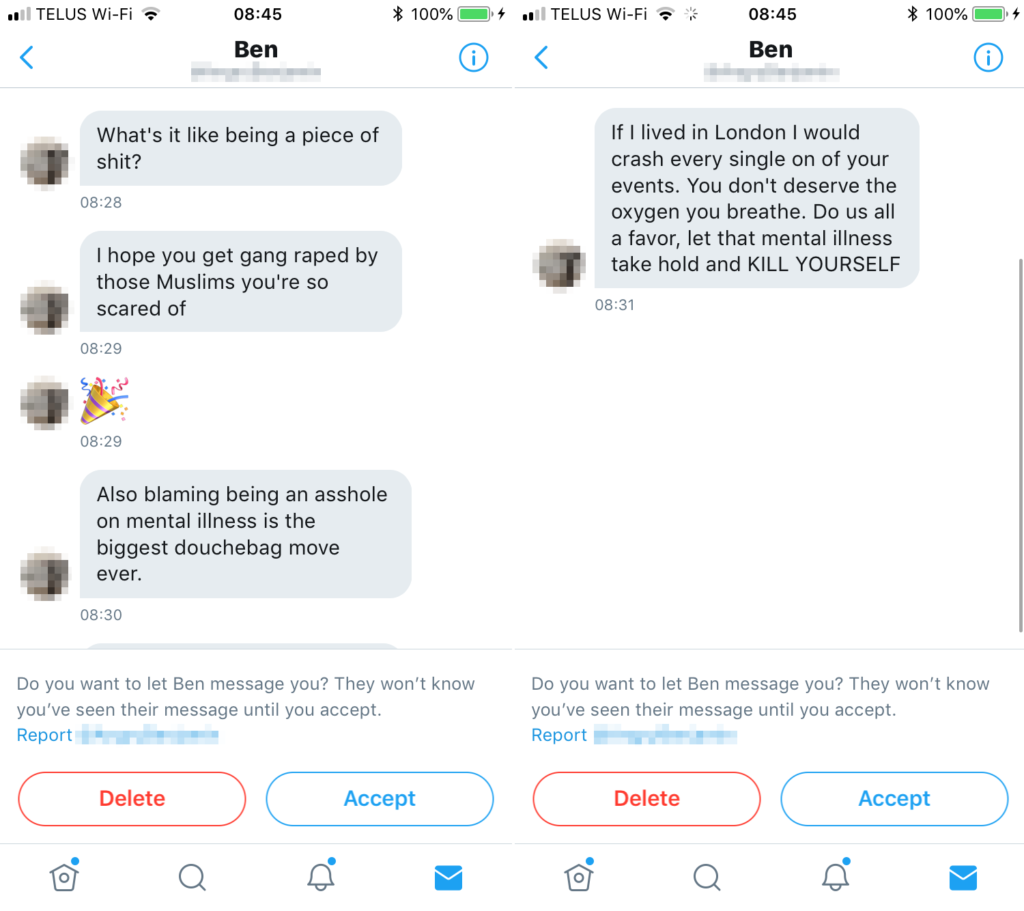 Especially now. As millennials come of age to seek political office, we near the point where every political candidate will have a social media history extending back to youth.

Everyone has uttered a regrettable word or two. Some had the forethought to not log them for the public record, mind you.

Regardless, every election of the last few years has had at least an entire week or two dominated by stories of who tweeted what, and when. In the 2018 election, I was the poster boy for social media missteps, but not the only example.

I distanced myself from words that don’t reflect who I am. While we should obviously be skeptical when a politician says anything, that also must include an understanding that past comments aren’t necessarily ironclad proof of one’s present character.

Maybe someone lashed out on social media because of a mental health battle, or cracked a lewd joke that seemed funny in the moment, or perhaps genuinely advocated something they no longer believe. If no genuine person could claim to have never evolved or grown in their lives, why should politicians be held to a different standard?

How or if they’ve conquered these mistakes is a better barometer than whether they exist in the first place.

If politicians must represent a population of real people with lived experience, we can’t scare off flawed, but qualified, people from seeking office, as the status quo does. Otherwise, we’re left only with the dynastic sorts who’ve been groomed for leadership from birth, a la Justin Trudeau.

This isn’t a call for censorship, but rather a plea for sensibility among those partaking in Canada’s national conversation on social media. If you don’t work to diminish the mob’s power, you may just become its target some day.

One Reply to ““Go kill yourself”: How social media mobs are hurting democracy”