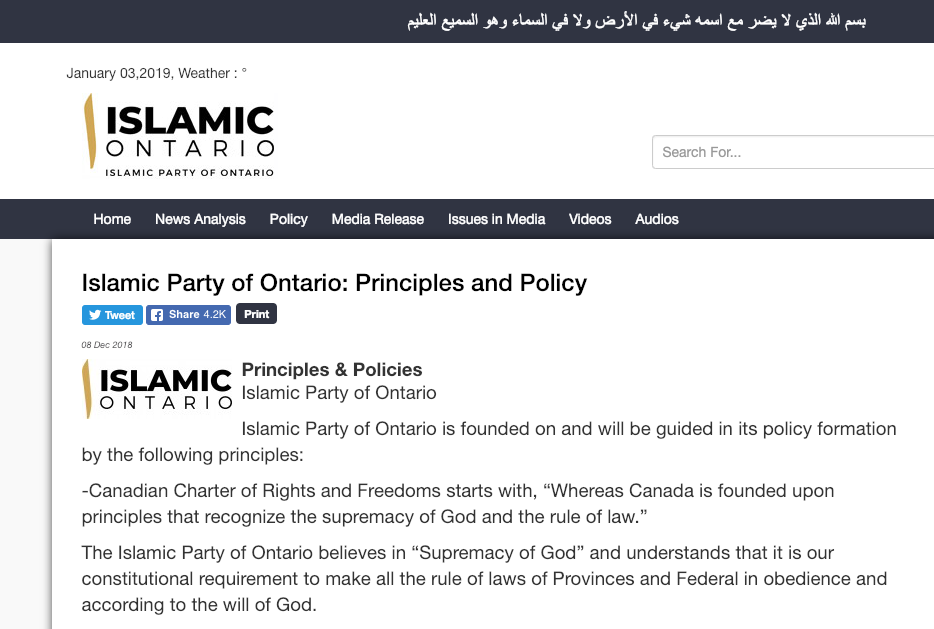 As first noted by Toronto Sun columnist Tarek Fatah, the provincial elections agency has granted a hold on the name Islamic Party of Ontario, generally the first step towards formally registering a party to field candidates in the province’s elections.

As a preamble to its policies and principles, a page on the would-be party’s website touts the opening line of Canada’s Charter of Rights and Freedoms avowing “Canada is founded upon principles that recognize the supremacy of God and the rule of law” to justify its desire to make all laws in “obedience and according to the will of God.”

After several bullet points about Islamic history and apologetics, the Islamic Party of Ontario unequivocally says its stances on all issues are rooted in the Qur’an and Sunnah.

This means an Islamic government would abandon capitalism in favour of “interest-free capital and worker partnership economy,” enshrine the right to food and shelter, and guarantee equality of opportunity for immigrants and native-born Canadians alike.

Utopic as this may sound to some, the party would also ban gay marriage, abortion, alcohol and gambling, as well as any sexual relations outside of marriage. The party also says “obscenity, vulgarity, nudity and perversion must be checked,” though it doesn’t specify an all-out ban. (Yay?)

While the Islamic party says it upholds freedom of speech, it also commits to a “strict law to ban blasphemy.” I don’t envy the judges who have to balance those rights.

Canadians may find areas of agreement with the Islamic party platform. Several of the social positions would be supported by evangelical Christians, while the economics are on par with those you’d expect from many left-wing parties.

Of course, some interpretations of the Qur’an prescribe the death penalty for apostasy. I couldn’t even manage to get elected while championing tax cuts, which strikes me as an easier sell than this.

Most Canadians will find the Islamic Party of Ontario’s values to be unpalatable even for private belief let alone state enforcement. The party is no more relevant than the Communist Party of Ontario or Go Vegan, which both ran candidates in last year’s Ontario election.

Setting aside the religious fervor most vegans have, the Islamic Party of Ontario would, if registered, be Ontario’s only faith-based party.

In response to backlash from conservatives, I’ve seen some on the left try to compare the Islamic party to the federal Christian Heritage Party. Unlike the IPO, which wants a full-throated Muslim theocracy, the CHP seeks only to make Judeo-Christian values the basis of law. Even so, both parties have about as much a chance at winning a seat, which is to say zero.

Some Muslim voters may support the party based on name alone. It may even find a bit of support in Don Valley West, the riding encompassing the Thorncliffe Park neighbourhood nicknamed “Halal heaven.”

Either way, it will remain a fringe party with no power or credibility in Canada, not worth the fear or scorn so many are affording it.

People should be concerned about the Islamist influences targeting mainstream, electable political parties.

There are suit-wearing apologists for Hamas and the Muslim Brotherhood wandering the corridors of power in Canada who believe the same things as the Islamic Party of Ontario but are far less brazen about expressing them.

It’s quite common to see a couple of notable organizations touted as mainstream and moderate voices for Islam and Muslims, when their values and funding tell a different story.

The anti-Islamophobia motion passed by the Liberals is the by-product of a push from one such group.

The real danger to Canadian institutions and values comes in the subtle and subversive way this influence has come about.

The Islamic Party of Ontario is about as subtle as Madonna twerking in downtown Riyadh.

We must actually watch those who try to overhaul Canadian democracy through legitimate—or seemingly legitimate—organizations. These groups have found audiences with pandering politicians of all stripes because of the political class’s eagerness to shore up support from specific ethnic and religious communities.

These groups also have a war chest that’s allowed them to successfully sue numerous Canadian media companies into silence, meaning they’re rarely, if ever, exposed.

These battles are taking place in the shadows of Canada. We should be grateful the Islamic Party of Ontario is at least being honest about its goals.