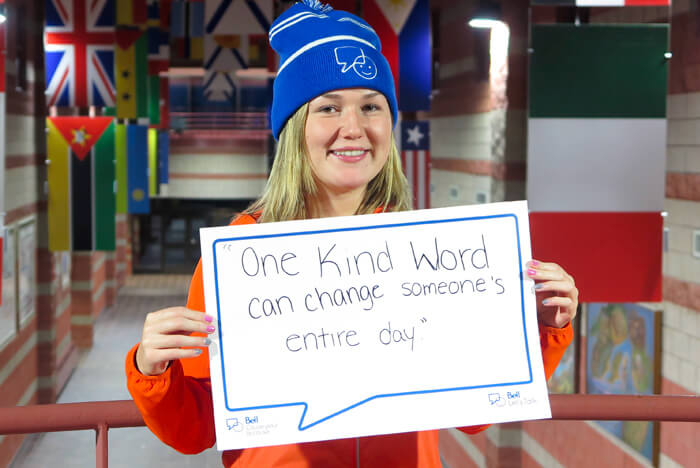 Bell Let’s Talk Day is once again upon us, wherein Bell puts money into mental health agencies in exchange for tweets, texts and Facebook posts.

While it’s first and foremost a fundraising campaign, it also serves as a great exercise in destigmatization by encouraging people to share their own experiences with mental illnesses, ranging from depression to schizophrenia.

When the first Bell Let’s Talk Day took place in 2011, I remember seeing posts from friends about situations I had no idea they’d gone through. It was similar to the #MeToo campaign in that respect.

People were sharing stories and getting immense support from friends and family. Money was being raised for a worthwhile cause. Alas, all good things must somehow be wrecked.

Within a few years, the story became about how Bell treats its employees, allegations of a workplace that lacks compassion for those in it with mental illness, criticisms that the campaign is all talk and no action.

I choose to look at the campaign at face value here. There’s nothing wrong with it, but we can’t be deceived into thinking the fight ends when Bell hands over its giant cheque.

For all those sharing their stories or supporting others who do, there are still people with significantly less enlightened views of mental health.

I wrote of one such example in this column published by Global News in July, 2017:

“You were suicidal? That makes you mentally ill! Why would anyone give you a microphone?”

That was among the first messages into my radio show this week after I made an off-handed reference to my 2010 suicide attempt.

I say off-handed because it’s hardly a revelation at this point, having written and spoken about my struggles with depression and suicide publicly for several years now.

While living with depression, I was always good at putting on my game face. So much so that when I was planning to end my life, I was so used to burying my true emotions that I never even considered opening up to those around me.

When I raise the issue now, the response is overwhelmingly positive — though not exclusively so, clearly.

From time to time, a callous soul emerges from such a dialogue, as was the case with the above message not-so-subtly telling me those with mental illness don’t deserve a platform in life.

As a talk show host, it’s not a work day if I’m not called a name or accused of being something bad, so I can take it. My concern comes from knowing that somewhere else, this is the reaction awaiting a vulnerable person who, for the first time in their life, reaches out to a friend, co-worker or relative for help.

The Canadian Mental Health Association estimates one in five Canadians will personally experience mental illness in their lifetime. So, if you know more than four people, you’ll cross paths with someone personally impacted by it, if you haven’t already.

For those doing the math, that’s 7.2 million people in the country facing this kind of judgment for no other reason than being sick.

I don’t want to sell short the successful efforts we’ve seen in Canada tackling and breaking down the mental illness stigma, but we can’t rest on our laurels now.

“Awareness” is not the problem.

There’s Bell Let’s Talk Day in January, Mental Health Week in May, September’s World Suicide Prevention Day, and Mental Illness Awareness Week in October, not to mention at least half a dozen diagnosis-specific awareness days and weeks. We’re so busy being aware collectively that we’re not confronting the issue in our own lives.

Virtually every month of the year has some sort of designation addressing mental illness, yet those individuals who speak out personally are routinely shot down. Cultural acceptance of mental illness won’t happen if we don’t tackle individual intolerance.

Just this week, a Michigan software developer posted a screenshot of her company’s chief executive officer’s response to her announcement that she was taking two days off to “focus on my mental health.”

Olark CEO Ben Congleton thanked her for helping to “cut through the stigma” by reminding people how sick days are just as important for mental health as they are for physical health.

Of course, some people responded with the concern that employees can abuse the system if this becomes acceptable. So what? What’s to stop people from feigning physical illness to get out of work now? What those raising this possibility are actually saying is that they don’t believe the struggles of workers with mental illness are legitimate.

That isn’t to say there aren’t those who conflate sadness with depression, or stress with anxiety, but experiencing mental illness is not a rarity, so it shouldn’t be treated as a fringe phenomenon.

While encouraging, the reality is that Congleton’s reply is not a typical one.

After sharing the nasty message I received, I heard from countless others who have similarly been chastized or mocked when they opened up.

One was a journalist who, after writing about her depression experience, was patronized by a reader who felt bad about criticizing the journalist because she was clearly so sensitive.

Don’t get me wrong — we’re crazy sometimes, but we’re not children.

An acquaintance who lives with schizophrenia — a disorder that affects one per cent of the population but is still widely misunderstood — told me he “can’t count the number of times” people have assumed he’s dangerous when they learn of his situation.

More commonly I heard from people who would love to speak out but just don’t want to deal with the backlash.

The irony is that I may be contributing to that apprehension in writing this, but I feel it’s important for people to know the realities of mental health discourse.

When I first told the world of my suicide attempt, it was after I’d made a commitment to myself to leverage my pain for bigger change. Meanies won’t stop that, but they will stop others from seeking help.